World Humanitarian Day: finding optimism in the work we do

It can be hard to find optimism with reports of war, epidemics, famine, cost of living, and climate crises, playing out around the world. So, this World Humanitarian Day we spoke to 4 Kiwi’s working to support human welfare in challenging environments across the globe, to find out how they stay positive in the work that they do. 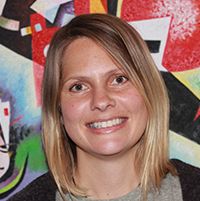 Last year, Vietnam faced severe and lengthy government lockdowns to prevent the spread of Covid. Our local Vietnamese project leader Hong, who founded and supports a 30,000 strong network of single mothers across Vietnam, proposed we establish a fund to provide access to emergency cash transfers for mothers who were particularly vulnerable and couldn't work to support their children. Seed funding of around $1,000 NZD was offered by Just Peoples donors to pilot the fund and provide support to the first 25 mothers in need. On checking in with Hong to determine how much money she required to scale up her Covid emergency response, I was shocked and delighted to learn the initiative had already become self-sustainable. Single mothers within Hong's network were inspired to provide emergency cash transfers directly to other members in their incredibly supportive community to ensure the most vulnerable mums and kids survived through lockdown.

I co-founded Just Peoples after my experiences as a ‘voluntourist’ and working for International Aid Organisations highlighted some of the key ways in which, despite good intentions, foreign approaches to tackling poverty often lead to ineffective solutions and the disempowerment of locals. We now back 15 local leaders to design and deliver grassroots solutions to poverty in their local communities. Whether I'm being inspired by a local leader about an innovative idea for their village or chatting with a Kiwi philanthropist about their goals to contribute to the world, I can't help but feel positive while surrounded by amazing, solution-focussed humans!

Between 2014-2019, I had the privilege of working as part of the refugee response in Uganda. With 1.4 million registered refugees, Uganda is the largest refugee host nation in Africa, and the organisation I worked for provided mental health support and trauma rehabilitation services. One of our team was a refugee from South Sudan called Issa, who was a brilliant facilitator. Seeing him run group mental health programs for other South Sudanese refugees was extremely moving. Issa understood, first hand, the psychological impact of war and the massive challenges associated with life in a refugee camp. Yet he was able to convey a message of hope and to support other refugees in their recovery. This experience highlighted for me the critical importance of the involvement of local people in effective humanitarian interventions.

My faith has been a key motivator in my decision to get involved in humanitarian work. In line with this, I think it’s important that we find creative and effective ways to empower people who are disadvantaged and marginalised. UNHCR recently announced that there are more than 100 million displaced people globally for the first time. While the scale of this is staggering, there are some compelling reasons for optimism. At Tearfund we have the privilege of backing some wonderful, locally led partners that are successfully empowering people to overcome the significant challenges that they face. 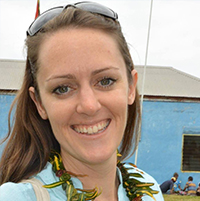 I grew up in an area that was impacted by cyclones and knew all too well the devastation that they caused. Then, as a 10 year old I watched with horror at the atrocities happening in Rwanda and felt a strong desire to do something. As a 24 year old I watched on as bushfires destroyed Marysville and surrounding areas in Victoria (Australia) and again had a desire to do something. These experiences, and many others, resulted in me studying a Masters of Humanitarian Assistance. It is humbling, inspiring, and a privilege to work with our local staff who are responding to disasters. More often than not our local staff have been displaced themselves yet they go above and beyond to serve the needs of their fellow country men and women. It is our local staff and the local people that keep me going, that inspire me, that help me stay positive.

When you’re up close and personal to disasters you get to see the worst, but even better, when you look, you get to see the best; the best of humanity coming together and supporting each other. I recently spent some time in our Ukraine office and our staff there, all internally displaced themselves, are working long days to help people, people they know that if they don’t get to them today, they won’t’ be able to reach them tomorrow, this drives them to work harder, to work smarter, and to work better. It is almost impossible not to be positive when you hear and see inspiring stories of how people overcome adversity. 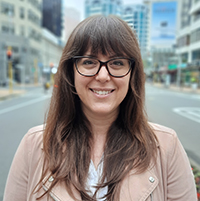 I have worked for almost a decade in humanitarian responses for a number of different global and local organisations. What has continually amazed me during each response – from Tropical Cyclone Pam in Vanuatu (2015) to working with Yezedi in Iraq running mobile health clinics for people displaced by conflict – is the capacity of the national staff to support their communities, even when they themselves had been impacted. During TC Pam, for instance, I was working with amazing staff, many who had lost their own homes, so committed to the response. In many cases, these individuals are the first responders in their own communities, so they have an in-depth understanding of the needs of their communities, and that knowledge helps inform our response. Similarly in Iraq, the team I was working with were themselves living in Internally Displaced People’s camps.

I am forever amazed at the resilience of the teams I work with, their knowledge, dedication and capacity to give. It is those people, who I have been lucky enough to work alongside, that have inspired me to stay positive as we work towards a shared goal. That’s extremely rewarding.